Since moving to the rural area of Ashburn, Ontario 10 years ago, Jay has become keenly aware of the effects of urban development on surrounding communities and environments, and sees a metaphor for how a similar development takes place in our minds.

If Jay’s not out doing community interviews, pop into the Little Station to say hi and see some of his work in progress. 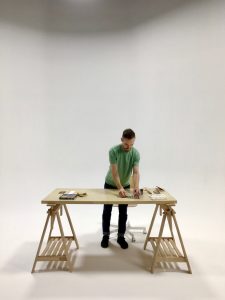 Jay Dart is a drawist who creates allegories for themes that straddle the mental, physical and digital realms. His practice includes drawings, bookworks and mixed media installations that further confound this dichotomy. By presenting extensive imagery alongside tangible ephemera and participatory activities, Jay has been establishing experiential exhibitions that push the boundaries of drawing and invite people to immerse themselves in his world.

In his ongoing Yawnder series, Jay has been rearranging the people and places found in antiquated images of settlers forging their way on the frontiers of the Canadian wilderness into a conceptually layered world that examines the mystical nature of inspiration, intellectual property rights, and our interconnected world.

This evolving narrative centered around his alter ego, Jiggs, also addresses his concerns with the contemporary state of our culture, including information overload, land development and environmental degradation.

In 2018, Jay’s practice was featured in a profile piece for the CBC Arts show The Exhibitionists. In 2016, his first public gallery solo exhibition, Greetings From Yawnder!, opened at the Robert McLaughlin Gallery in Oshawa, featuring 80+ drawings and installation pieces, before travelling to the Art Gallery of Sudbury. The accompanying catalogue for this exhibition, Field Guide to Yawnder, is included in the Art Gallery of Ontario shop. Dart has exhibited both nationally and internationally including recently at Drawing Now (Paris), Galerie Youn (Montreal), Mayberry Fine Art (Toronto), Slate Gallery (Regina), Papier (Montreal), Agnes Jamieson Gallery (Minden), a solo booth at Art Toronto, and a solo exhibition at Gallery Jones in Vancouver.

The Port Hope area is not unlike Jay’s adopted home in the hamlet of Ashburn, in the north part of the Durham Region. He lives on the outskirts of the sprawl where there is more unused land than there is developed land.

Recently, Jay’s work has begun to focus on the Old Fields – an ecological term that describes the lots that were once settled, used and maintained, only to be abandoned in our new era where the demand for what was once provided by this land is low and the folks who worked it are not being replaced when they are no longer willing or able to keep at it. On these abandoned lands, a succession occurs that can either result in the rapid return of a native ecosystem or change toward a completely different system. These novel and emerging ecosystems often have unpredictable dynamics and impacts. Jay finds these fields beautiful, and can’t help but think how they are an allegory for our times.

For his residency project, Jay intends to interview community members, and document Northumberland’s old fields (particular focus on Port Hope’s rural heritage) in the form of photos and field sketches, to create finished drawings and mixed media sculptures in the Little Station that play with the idea of “novel” species emerging in these fields.

With funding support from Ontario Arts Council and Canada Council for the Arts (in partnership with CBC’s Digital Originals initiative), Jay’s work during his residency in Port Hope will be adapted for digital animation and incorporated into his larger body of work.