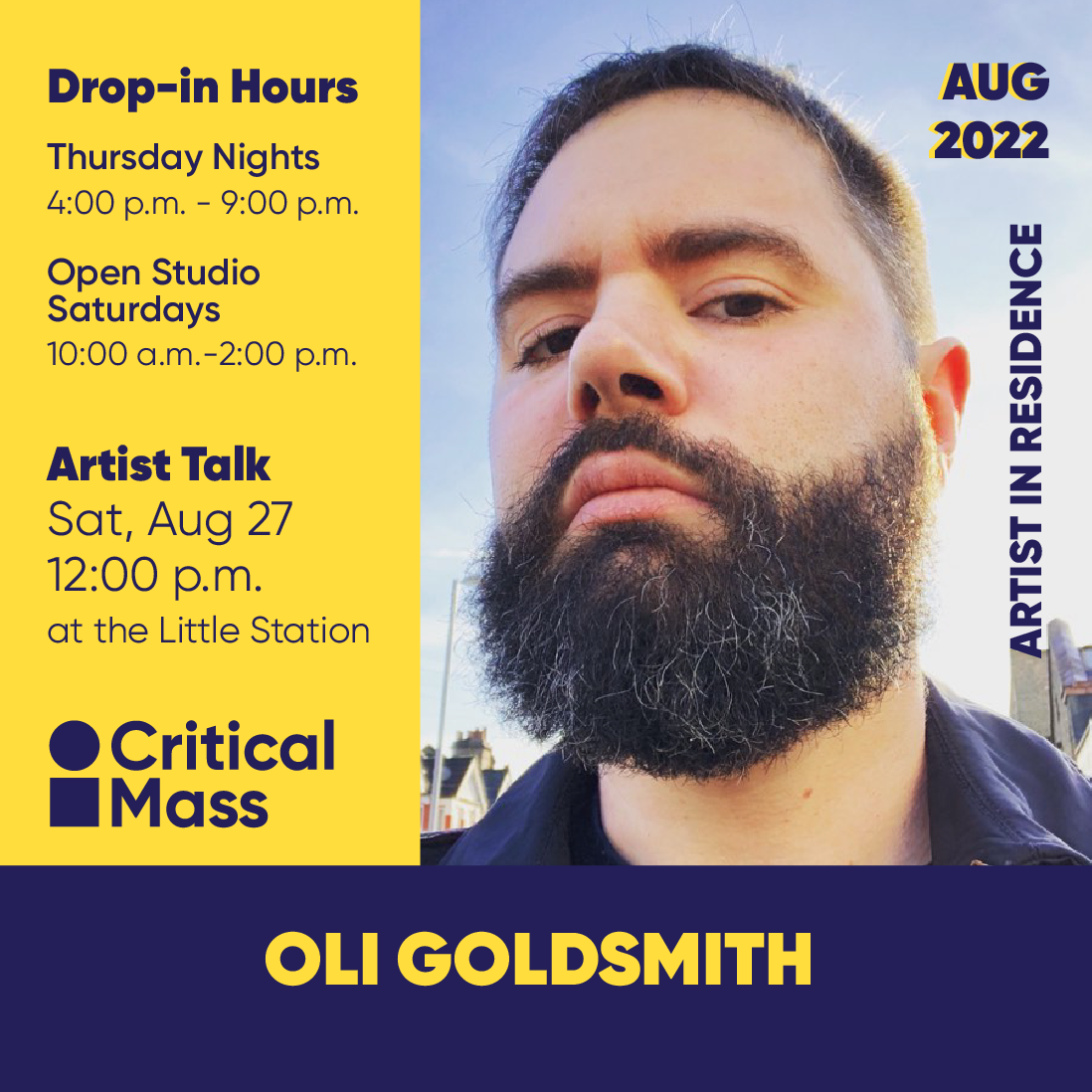 On August 18th at 6:00 p.m, Oli will hold a workshop open to all ages, to get a look ‘behind the scenes’ of his process, and experience hands on involvement in the Hope Portal project by helping capture some digital material – photo, video, 360 video and even 3d scanning – around the ‘little station’ / Critical Mass.

Materials: Oli will have on hand a number of cameras and devices but encourages bringing any digital cameras and smartphones.  He will be sharing techniques, apps and methods which anyone curious can help capture and see the results embedded into the final artwork.

Workshop sign up sheet available at Little Station, or email your interest and/or RSVP to info@criticalmassart.com

The real voyage of discovery consists not in seeking new landscapes, but in having new eyes.
– MARCEL PROUST 

In response to the imposed isolation of recent years that has left many feeling disconnected from both the environment and other community members, and to the curatorial theme Where do we go from here?, artist Oli Goldsmith’s response was right HERE.  

During his August residency, Goldsmith hopes to spark viewers’ imaginations to rediscover their surroundings through ‘new eyes’ – through his own re-discovery and artistic representation of his community of Port Hope.

Hope Portal – sets out to embrace 360 VR (virtual reality) and related creative technologies to weave an immersive and holographic portrait of Port Hope.  Throughout his residency, Goldsmith will weave a dynamic multi-dimensional and virtual tapestry expressive of the texture and feel of Port Hope through his personal lens as captured through 360 photography and re-combined as a sort of “digital hyper-montage”.  The resulting artworks, both still and immersive environments, will offer abstract and blended representations in a less literal and more playful ‘holographic’ way. Through blending various 360 and photographic point of views together, a sense of multiple overlapping ‘reality-tunnels’ (each of our unique lens’ through which we perceive & shape our experiencing of the world) is central to Goldsmith’s approach for this residency project.

Intimations of a broader sense than one’s individual ‘Reality tunnel’ – implying a ‘many-faceted’ portrait of our dynamic and overlapping community experiencing (human and animal alike) are intentional. 

On August 18th, the public is invited to a hands on photography workshop and exploratory walkabout, to help capture material – photo, video, 360 video and even 3d scanning – around the Little Station that may be incorporated into Oli’s final culminating project. Goldsmith will present his finished work in a variety of formats at his Artist Talk on Saturday, August 27th.  

A dedicated website will house the immersive / interactive work in 360 degree video format. Limited edition and original ‘Hope Portal’ artwork will also be available for purchase.

Goldsmith’s work explores the impact of technology on the human psyche; on a personal and collective level. The image and the word seem to explode the possible for our species – those most stunning human traits as self-awareness and comprehension of conscious phenomena both expand and are influenced by our media environment.

While working with surreal and often personal material – Oli’s compositions are informed by popular culture, evoking the consumer media landscapes that surround us online and off. He is intrigued by how communications technologies shape and define the modern sense of what it means to be an individual and impacts our sense of Self.

Exhibiting since he was 16, Oli Goldsmith’s prolific career has landed him acclaim, awards, and numerous projects for major agencies, record labels and entertainment companies. Oli’s collage paintings reside in many private, public and corporate collections across the world, including Maple Leaf Foods, Johnson & Johnson, Royal Canin Pet Foods, and The Sagamihara City Collection in Japan.