Susan Campbell will explore the physical environment — mapping practices as a means to interpret and reflect on the design dynamics found within in urban landscapes during her residency. 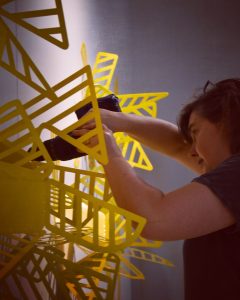 Susan Campbell is an interdisciplinary artist working at the intersection of lens-based media, sculpture installation and intervention. She obtained an MFA in Art, Media and Design from OCADU after extensive studies in design and digital media in Ireland.

Campbell investigates signs and patterns of urban intensification as played out on development sites, parking lots and public sidewalks. Her work frequently explores physical mapping practices as a means to interpret and reflect on the design dynamics found within the urban landscape, confronting issues brought about by the intensification of urban development. Her work prompts people to think about and question the economic frameworks that underpin their built environment, particularly how such frameworks engender a visual culture that is predominantly techno-graphic in nature. In addition to exhibiting across Canada and internationally, Campbell has received numerous grants from Canada Council of the Arts and Ontario Arts Council.

Unmapped: A Synthesis of Urban Patterns

Urban patterns are generally described in terms of the volume, shape, and scale of buildings which make up the spatial arrangement of a town/city. The urban patterns of Port Hope are based on the underlying grid structure and terrain on which the town was built as well as the time period in which it was first settled.

This project aims to expand the traditional understanding of urban pattern and explore elements related to phenomenology of place. “Unmapped” in the project title refers to a sense of a place that has not yet been captured as a map.

• What happens if we stop defining urban patterns in terms of figure-ground relationships between open and closed spaces, and instead explore rhythm and movement of place as recorded or rendered by the perceiver?

• What happens when urban patterns are defined by how we experience place through sounds, rhythms, and movements?

• If applied to Port Hope, what sort of map can the proposed activities generate?

• Walking and Drawing: Involves a combination of walking, looking, and dérive throughout Port Hope, as well as making observational drawings, mostly architectural in nature.

• Sensing Place: Using psychogeography as a departure point for recording visual and aural elements to capture a sense of place through sound recordings and photography.

• Rhythm and Pattern: Identifying and recording movement patterns throughout the Municipality of Port Hope. Examples include the rocky rapids of the Ganaraska River, pedestrian activity at intersections, etc.

• Consolidation: of the outputs from the above activities into an exhibition and/or public art installation.